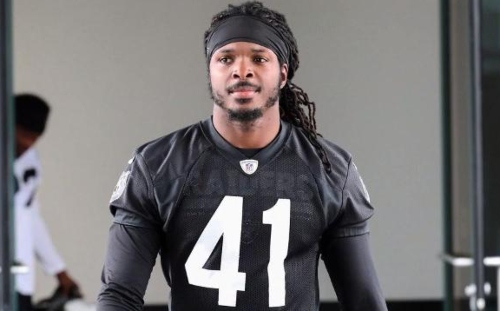 Neiron Ball was a former American football outside linebacker for the Oakland Raiders of the National Football League.

Ball attended Jackson High School in Jackson, Georgia, where he played football. As a junior, he recorded 104 tackles (35 for loss), 19 sacks and forced seven fumbles.

He played college football for the University of Florida. He chose Florida over Alabama, Clemson, Georgia, LSU and South Carolina. He played at Florida from 2011 to 2014.

He was drafted by the Oakland Raiders in the fifth round of the 2015 NFL Draft. On September 27, 2015, Ball got his first career sack against Josh McCown in a 27-20 win against the Cleveland Browns. On December 12, 2015, Ball was placed on injured reserve. On September 3, 2016, Ball was waived/injured by the Raiders and was placed on injured reserve.

On July 7, 2017, Ball was waived with a non-football injury designation, likely due to a condition called Arteriovenous malformation, which Ball was first diagnosed with in 2011 while playing for Florida , but recovered and was able to play football. On September 16, 2018, Ball suffered an aneurysm in his brain and was placed in a medically induced coma. In July 2019, Ball’s aunt and sister released a joint statement revealing that Ball had woken from the coma but was now a quadriplegic.

Neiron Ball Cause of Death

Neiron Ball’s cause of death was not revealed. However, he had been in a medically induced coma since September 2018 after he suffered a brain aneurysm.

Ball was placed in a medically induced coma in September 2018 at Emory Hospital in Atlanta after he suffered a brain aneurysm. On July 23, 2019, Ball’s family launched a GoFundMe page to help to pay for his medical care.

The family said in a statement at the time: “During his time at Florida, Neiron was diagnosed with a rare, congenital condition called arteriovenous malformation (AVM). This condition causes the brain’s blood vessels to get tangled and rupture.

“On September 16, 2018, Neiron was admitted to Emory University Hospital in Atlanta, GA with a ruptured blood vessel and diagnosed with an aneurysm.

“Neiron is currently fighting for his life. Unfortunately, his health insurance does not cover the appropriate care necessary to give him the best chance of recovery. With the appropriate neurological and rehabilitative care, Neiron will be given the fighting chance he deserves.”