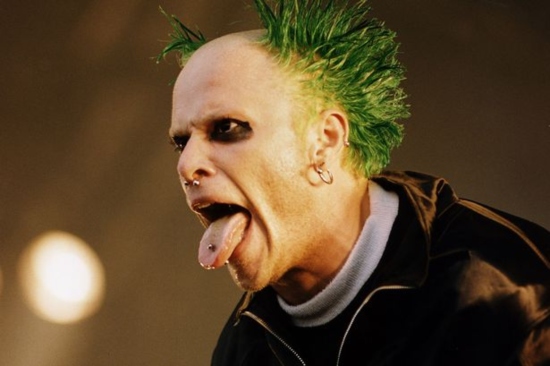 Keith attended the Boswells School in Chelmsford and moved to Braintree after leaving school and travelling where he eventually met Liam Howlett at local rave club the Barn in Braintree.

Originally recruited to serve as the dancer by the Prodigy, Flint became the voice and face of the group for 1997’s The Fat of the Land, which produced the hits “Breathe,” “Firestarter” and controversial “Smack My Bitch Up” on both sides of the Atlantic; The Fat of the Land reached Number One on the Billboard 200 in July 1997.

Following a five-year recording hiatus at the peak of their popularity, the Prodigy and Flint released the 2002 single “Baby’s Got a Temper,” whose lyrics penned by Flint celebrated the “date rape” drug Rohypnol. Howlett would later disown the track and drop it from The Fat of the Land‘s 2004 follow-up Always Outnumbered, Never Outgunned, which featured guest vocalists in place of Flint.

He dated TV presenter Gail Porter and they broke up in 2000. He married Japanese DJ Mayumi Kai in Felsted in 2006. They subsequently separated.

He had no known children.

Flint was born to Clive and Yvonne Flint.

On 4 March 2019, following concerns for his welfare, police were called to Flint’s home, where he was found dead. The police were not treating his death as suspicious.

Flint’s death was confirmed by The Prodigy in a statement on Facebook. The statement read: “It is with deepest shock and sadness that we can confirm the death of our brother and best friend Keith Flint. A true pioneer, innovator and legend. He will be forever missed.

“We thank you for respecting the privacy of all concerned at this time.”

Flint’s bandmate Liam Howlett confirmed via Instagram that Keith Flint’s cause of death was suicide. He wrote, “The news is true , I can’t believe I’m saying this but our brother Keith took his own life over the weekend , I’m shell shocked , fuckin angry , confused and heart broken ….. r.i.p brother Liam #theprodigy”

The news is true , I can’t believe I’m saying this but our brother Keith took his own life over the weekend , I’m shell shocked , fuckin angry , confused and heart broken ….. r.i.p brother Liam #theprodigy

According to The Sun, Keith Flint had built up an estate worth £11.6million before he took his own life on 4 March 2019 aged 49. He owed £7.3million in debts and taxes when he died. Official figures show his fortune was slashed to £4.3million after his affairs were fully settled.