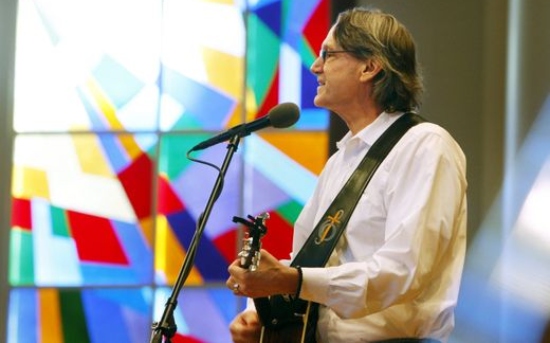 John Kilzer was an American singer and songwriter.

He was a former two-year All-State and one-year All-American basketball player for Jackson Central-Merry. He attended Memphis State in 1975 and was a four-year letterman in basketball. He earned a MA in English and was a full-time instructor at Memphis State from 1984-1987 as a professor of Modern Literature and Basic Composition. He completed his Master’s thesis on William Butler Yeats and Carl Jung.

In 1987, John signed a major recording deal with Geffen Records in Los Angeles. His first recording, Memory in the Making, had a top-ten song on AOR charts, Red Blue Jeans, and its music video appeared on MTV. He travelled the states with the Moody Blues and Little Feat, then all of Europe with the Canadian band Tragically Hip. He made his second recording, Busman’s Holiday, in 1992, followed by more touring.

John Kilzer signed a publishing deal with Belz Publishing between 1997-2000 and wrote songs mostly from Los Angeles and Nashville. His songs have been recorded by Roseanne Cash, Trace Adkins, Jimmy Davis, and Dobie Gray, among others. One of John’s songs was used on the television show Melrose Place.

John Kilzer entered recovery in 2000. He earned his M.Div. from Memphis Theological Seminary in 2005. He served as pastor of a two-point charge in Crockett County from 2007-2009. John served as Director of Theology and Arts at MTS in 2009, and he was ordained in 2010. This was same year he began The Way, the recovery ministry at St. John’s. In 2010 he was also awarded his PhD from Middlesex University in London, England.

He was married to his wife Stacy.

John Kilzer died on March 12, 2019. Kilzer’s death was confirmed by St. John’s United Methodist Church in Memphis, where he served as an associate pastor for recovery ministries.

The church said in a statement: “It is with tremendous sadness that we announce the sudden death of John Kilzer, our associate pastor of recovery ministries and our friend. May love and peace be poured over John’s loved ones and this community as we grieve the incredible loss of this beloved member of the St. John’s Family.”

John Kilzer Cause of Death

John Kilzer’s cause of death has not been disclosed.