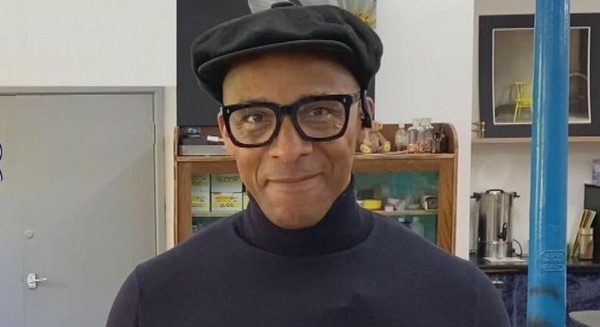 Jay Blades is an English furniture restorer and television presenter originally from Hackney but currently based in Wolverhampton.He is best known for presenting The Repair Shop, Money for Nothing and co-presenting Jay and Dom’s Home Fix. He has also appeared in Would I Lie To You?, Celebrity Masterchef, Richard Osman’s House of Games, and Michael McIntyre’s The Wheel.

As a young man he worked as a labourer and in factories.When he married, he and his then wife, Jade, set up a charity based in High Wycombe, Out of the Dark, to train disadvantaged young people in furniture restoration. The charity lost funding, his marriage broke down and he became homeless. He was supported by friends and by the Caribbean community. Around the same time, television producers saw a short film about the charity which led to his work as a television presenter.He also has his own company, Jay Blades & Co.

After university, he set up a charity encouraging young people who struggled, like himself, academically to get involved with practical jobs. After learning how to restore furniture, he began teaching others and eventually became presenter of the popular show .

He went to study criminology at the Buckinghamshire New University .

He is in a relatonship with his partner, Christine Goodman who works as a marketing specialist for consumer goods and retailer. They have been together for four years and live in Wolverhampton with their children at his family home. Previously, he was married to his ex-wife Jade and had a daughter together.

He has a daughter, Zola Blades,and a step-daughter, Paris Goodman. He also has two other children from his previos relationships.

He was raised in East London with his mother who worked as a secretary and half-brother. He is one of 26 children his father fathered in different countries.