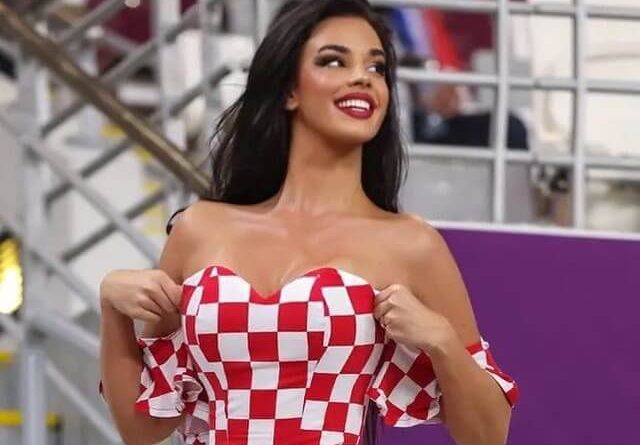 Ivana Knoll is a Croatian model, entrepreneur, TikTok star, Instagram influencer, and social media celebrity. She has been dubbed the “World Cup’s Hottest Fan” at the 2022 FIFA World Cup in Qatar. She is the owner of knölldoll, a clothing brand made in Croatia.

According to the bio on her clothing website, the goal of the brand is to “make an original Croatian product. A minimalistic range inspired by Croatia’s affair with the Croatian national symbol, red and white checkerboard, which are recognized by people all over the world after many Croatian successes, and especially after the World Cup in the summer of 2018.”

The website adds: “Feel flawless and carefree in high-quality fabrics, exotic tones and attractive Croatian designs featuring cheeky cuts that make a statement. Our pieces are designed to make women feel like a doll. Make heads turn in our fiercely bold pieces.”

Former miss Croatia model Ivana Knoll, who splits her time between Croatia and the United States, has been dubbed the “World Cup’s Hottest Fan” at the 2022 FIFA World Cup in Qatar. She has been pushing the modesty dress code of Qatar and causing a stir online.

The Croatia supporter wore a full-length red and white checked dress with a hood for Croatia’s opening Group F match against Morocco at the Al-Bayt Stadium on November 23, 2022.

Knoll returned in a strapless, red and white checked minidress for Croatia’s second fixture with Canada at the Khalifa International Stadium in Doha on November 27, 2022. She wore matching socks as well.

The Qatar Tourism Authority states that “visitors (both men and women) are expected to show respect for the local culture by avoiding excessively revealing clothing in public. It is generally recommended for men and women to ensure their shoulders and knees are covered.”

Knoll told the PA news agency outside the Khalifa International Stadium: “First I was thinking if the World Cup is happening there (Qatar), for sure they will allow us everything to make it comfortable for all fans without any of the restrictions.

“Then I heard about the rules and I was shocked. The dress code forbids showing shoulders, knees, belly and everything and I was like ‘Oh my God, I don’t even have the clothes to cover all of that.”

“I was super angry because if I’m not a Muslim and if we in Europe respect hijab and niqab, I think they need also to respect our way of life, our religion and in the end me wearing dresses, bikinis because I’m Catholic from Croatia who is here because of the World Cup.

“But when I arrived I was surprised they were not making any problems about dressing, they allow you to wear everything that you want – except in government buildings, and in the end that’s fine.”

Asked if she had felt there was any risk of being arrested for her outfits, Knoll replied: “I am never afraid of something like that.”

Knoll said what she was doing was not hurting others, adding: “And I think how my dress or bikini can hurt someone? Please explain that. The reactions are very good. Many of the Qatari people came to me to photograph me. If they hate it and they have something against it, they wouldn’t do it. I think it’s just another way of life, me and them.”

Model Ivana Knoll’s net worth is estimated to be $1 million. As a social media influencer, Knoll is paid to promote various products on her Instagram and other social media accounts.