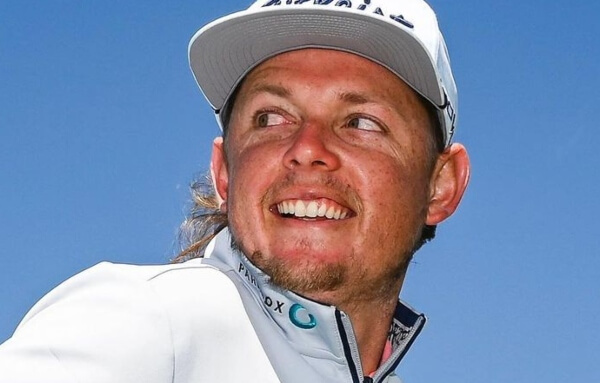 Cameron Smith is an Australian professional golfer who currently plays on the PGA Tour and the PGA Tour of Australasia. He played on the Asian Tour in 2014. He won the 2017 Zurich Classic of New Orleans with his partner Jonas Blixt. The golfer won the tournament again in 2021 with Marc Leishman. Smith won the 2022 Sentry Tournament of Champions, the 2020 Sony Open in Hawaii and the Australian PGA Championship in 2017 and 2018. He also was runner up in the 2020 Masters.

As an amateur, Smith finished in a tie for 4th at the 2012 Queensland PGA Championship. He shot rounds of 68-66-68 to tie with fellow Australians Rohan Blizard, Ryan Haller, Paul Hayden, Terry Pilkadaris, and Hamish Robertson, 3 shots short of winner Andrew Tschudin of Australia. In 2011, he won at the 2011 Australian Boys’ Amateur, the Australian Amateur Stroke Play, and the Victorian Junior Masters. In 2012, he was a medallist at the Australian Amateur which he won in 2013.

Cameron Smith turned professional in 2013 and played on the PGA Tour of Australasia. He has won twice on the PGA Tour of Australasia having won the Australian PGA Championship in 2017 and 2018. In 2014, he competed on the Asian Tour, Smith earned seven top-10 finishes and finishing 5th on the Asian Tour Order of Merit. He recorded his season-best finish a tie for 2nd at the 2014 CIMB Niaga Indonesian Masters. He made his PGA Tour debut at the CIMB Classic in October 2014, the event was co-sanctioned with the Asian Tour, where he finished in a tie for 5th.

In April 2015, he finished in a tie for 15th at the RBC Heritage, playing on a sponsor’s exemption. He qualified for the 2015 U.S. Open and finished top-4 earning him an invitation to the 2016 Masters Tournament. Smith also earned Special Temporary Membership on the PGA Tour for the remainder of the 2015 season. Smith earned his 2015-2016 season PGA Tour card after his top-125 finish on the FedExCup points list as a non-member.

In 2016, Smith ended 157th on the FedEx points list. He was runner-up in the Nationwide Children’s Hospital Championship on the Web.com Tour Finals which guaranteed his return to the PGA Tour for the 2017 season. In May 2017, Smith, partnered with Jonas Blixt, won the Zurich Classic of New Orleans, the first team event on the PGA Tour since 1981. The pair defeated Scott Brown and Kevin Kisner in a playoff. It was Smith’s first career PGA Tour win.

In December 2018, Smith defended his title at the Australian PGA Championship, winning by two strokes over Marc Leishman. In January 2020, Smith won the Sony Open in Hawaii in a playoff over Brendan Steele; his first individual victory on the PGA Tour.

In April 2021, Smith won the Zurich Classic of New Orleans for the second time. This time he was partnered with fellow countryman Marc Leishman. The duo won in a playoff over Louis Oosthuizen and Charl Schwartzel. In January 2022, Smith won the 2022 Sentry Tournament of Champions at Kapalua Resort on Maui, Hawaii.

He was born on August 18, 1993, in Brisbane, Queensland, Australia. He currently resides in Jacksonville, Florida, United States.

Is golfer Cameron Smith married? He is not married. The golfer is in a relationship with his girlfriend, Jordan Ontiveros.

Cameron’s parents are Des and Sharon. His father is an accomplished golfer.

Golfer Cameron Smith started sporting a mullet in 2021, just in time for the year-delayed 2020 Olympics in Tokyo. He was one of the Australian players who represented his country in the men’s golf competition. He had “AUS,” the abbreivation for Australia in the Olympics, shaved into the side of his mullet.

“I mean, it’s the Olympics. It doesn’t happen too often,” Smith said ahead of the Olympics. “I thought I would give Australia a shoutout on the side of the melon. I thought about it for a few weeks beforehand and then I just said, ‘Stuff it, I’m going to do it,’ and I think it’s been received pretty good.”

When Smith teamed up with fellow Aussie Marc Leishman at the 2021 Zurich Classic of New Orleans, Leishman showed up on the first tee with a blonde wig to make light of Smith’s mullet. Their walk-up song was “The Mullet Song” by Jay Powell.

When he defended his title at the Sony Open in Hawaii in January 2021, Smith explained why he rocking a mullet.

“It just come around, I saw a few of the rugby league boys at home doing it,” he said. “It was a great time to do it during quarantine, just something fun. Make people have a laugh about it. I’ve just kind of kept it going. I’ve almost turned it into my good luck charm. It not bad. I think it needs a little bit of a trim at the front. I’d really like to go full business at the front and party at the back. But maybe within the next couple months, it might change up a little bit.”

Smith had promised to his girlfriend, Jordan Ontiveros, that he would get rid of the mullet if he won on the PGA Tour with it.

During the post-round interview session with the media at the Zurich Classic, Smith had to brush up his explanation that despite whatever promise he made his girlfriend, the mullet was staying.

“Before the tournament started, Cameron, you said that you had a deal with your girlfriend that when you won you would cut the mullet. What’s the status of the mullet?”

Smith: “I would have to apologize to my girlfriend, it’s not going away. I mean, it’s, I feel like it’s part of me now,” adding: “It’s really cool. It gives the fans something to get behind. Lots of people love it and it’s good fun as well. It makes people laugh. I love it.”

Cameron Smith’s net worth is estimated to be $10 million. A large portion of his net worth is from endorsements and sponsorships. Cameron’s sponsors include Original Penguin (part of Perry Ellis), Citi, Titleist golf equipment, Open Sky Group and Foot-Joy footwear.

Golfer Cameron Smith has earned $19,243,345 in career earnings. After his win at the 2021 Zurich Classic of New Orleans with partner Marc Leishman, Smith became the 132nd player to surpass the $15 million mark in career on-course earnings.