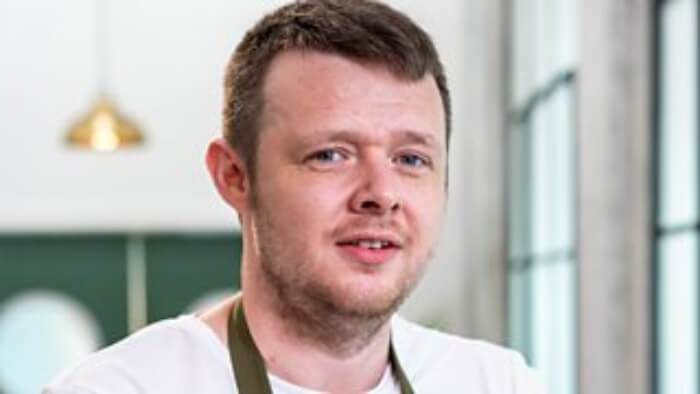 Stephen Hope is the chef at Dawsons Restaurant in Castledawson, County Derry. He began his career at Merchant Hotel, where he worked his way up to Sous Chef before moving to Michael Deane’s 1* restaurant in Deanes on Belfast’s Howard Street.

In 2008, Stephen entered the Gordon Ramsay Scholarship along with 500 other young chefs to claim the top spot, and has since cooked at many of Ramsay’s restaurants in London, Paris and New York. Aged 18, he claimed a silver medal in Ireland’s Junior Chef of the Year before going on to be the youngest person to win Ireland’s Senior Chef of the Year just two years later.

In November 2017, Stephen and his wife opened their restaurant in Castledawson in what was previously a butchers.

“A friend of mine had taken over the butchers and turned it into a seafood bar,” he told Belfast Media. “He also had a separate restaurant and found it difficult running two resturants at the same time. I bought it from him and converted it into a casual dining restaurant. We focused on quality and using good, local ingredients.”

“On our first night we served about 12 people which was disheartening, but now we have started to pick up and are full really every night.”

Is Stephen Hope married? The chef is married. Stephen and his wife have a daughter.

Belfast-born chef Stephen Hope is taking part in BBC’s Great British Menu 2022. He is one of the four chefs representing Northern Ireland and showcasing the best of their cooking abilities. He is competing against Gemma Austin, Chris McClurg and Marty McAdam in the Northern Ireland heat of the competition.

A long-time fan of Great British Menu, Stephen is thrilled to be representing Northern Ireland on the show that he has watched and enjoyed for many years.

“The show has been on TV for about 16 or 17 years now and I have watched it every year from when I was about 17,” Stephen said. “I have always thought while watching it that it is something that I would love to do. I wanted to know how I would handle my nerves and so it was amazing doing it.”

“I was blown away by how organised they were as well. We had to constantly do Covid tests. They had a step by step plan of what I was doing each day, what times you were doing everything at and just seeing the whole steps that go on behind the scenes was unbelievable.”

Stephen trusts that his past experience as a competitive chef gives him competitive advantage on the show.

“I think with my competition experience before with the Gordon Ramsay Scholarship and winning Northern Ireland Chef of the Year you sort of know what to expect,” Stephen told Belfast Media. “With it being televised, it is just so much more pressure as there are so much more eyes on you and you make mistakes that you wouldn’t normally make.”

“It was definitely amazing to do and I would love to do it again as I know what they are looking for now. Beforehand I didn’t really understand the brief and I was trying to stick to my region, stick to using Irish produce and every dish I did had a personal link to me.”

In a social media video, Stephen said: “I would say my dishes are original, creative, and they are all very unique. It would mean everything for me to get to the banquet. I put a lot of work into it. It would make me proud, I think it would make my daughter proud as well so I’m going to give it my all.”